A Special Pair of Gullwings at Amelia Island

Story and Photos by Jim McCraw and Mercedes-Benz

When was the last time you heard about Mercedes-Benz Gullwings with consecutive serial numbers sitting side-by-side at a car show?  Well, it happened at the 2019 Amelia Island Concours d’Elegance, and the founder and chairman of the 24-year-old event, Bill Warner, had a lot to do with reuniting serial number 43 with serial number 44. Here’s how it happened:

Nate Lander, veteran manager of the Mercedes-Benz Classic Center in Irvine, California, said, “It’s interesting that the stars aligned for us. We actually bought the blue car first, about 2012, and we started the project as a full restoration of an older restoration. It had been restored once, but, unfortunately, there were a lot of things wrong with it. It was an early production car, obviously, being number 44, and it has a lot of unique features that are just for the early cars. The gooseneck shifter was missing, there was a radio installed, speakers installed, and all of that is incorrect for an early Gullwing. The first 51 cars were built with the goose-neck shifter, the exception being Briggs Cunningham’s car, because his car, chassis number three, was retrofitted with a straight shifter for racing.” 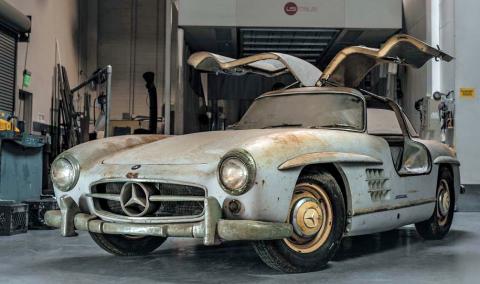 We got the blue car down to the point that it was a body-in-white, all the metalwork was done, and then we sold the car to the current owner. The original car was fire engine red with a white leather interior, but the owner said it wasn’t his cup of tea, so we looked at the color palette of the period and decided on this 335 Mercedes blue with the 1068 natural tan leather and the fitted luggage. It took about 4000 hours to do the restoration.”

Lander said of the barn-find Gullwing, “About six years ago, Bill Warner said ‘There’s a guy here in Jacksonville who has a Gullwing that’s been sitting for a long, long time.’”

‘After the concours, in 2016, he took us to meet the owner of the car, and he opened up the storage unit in Ponte Vedra Beach, and sure enough, there is the number 43 car. We thought ‘How wonderful it is to be restoring 44, and here is 43, untouched, showing 35,308 miles on the odometer.’ So that car answered a lot of questions about how things were done because it was an early build, virtually untouched. We were able to nuance a lot of the details of the early cars with that one.”

Lander said that the available evidence points to the fact that the 43 car was a Jacksonville car ever since it left Max Hoffman’s dealership in New York, a U.S. spec car with sealed-beam headlamps and bumper overriders, and Englebert Competition tires. The original color was 350 medium blue, with grey leather. Lander says both 43 and 44 were originally sold with the steel wheels and hubcaps, but 44 was converted to the Rudge knock-off wheels at the new owner’s request. He says 43 was bought by an attorney for the Winn-Dixie grocery chain, who then sold it to his mechanic, a Mr. Glendenny, who lived down the street from Bill Warner, who first saw the car when he was 16 years old. 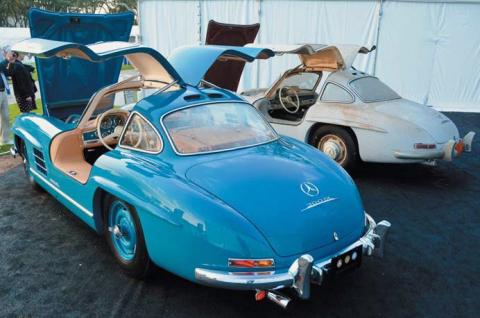 Lander said the car had been stored upstairs in an old dealership building in downtown Jacksonville since 1965. The bumpers were off, and some of the trim was off the car, because it was going to be repainted. It had been sold on to a U.S. Navy aviator stationed in Jacksonville who left the Navy, and drove it to law school. He says the spare tire and wheel in the trunk were purchased after delivery, reflecting a different style of spare with different date codes. The dealership moved, and the car moved with it, sitting in storage from 1985 until October of 2018, when the Classic Center bought the car.

The 43 car has now been sold to the original Classic Center in Stuttgart, where it will become part of the All-Time Stars collection. From Amelia Island it was scheduled to be airfreighted to Stuttgart, then to Dusseldorf to be shown in the Essen Techno Classica.

Lander says, “Its fate is a little bit uncertain, but it going to Europe at this point. It’s kind of headed home again.”