Sold privately and without advertisement by Scott Grundfor Company as a pair in December of 2020, we thought we’d share this unique Mercedes story of Mom’s 220 S Coupe and Dad’s 300SL Roadster with recollections by the son who knew the cars his entire adult life and who helped steward them for over 60 years. An American Mercedes-Benz story of true enthusiast care, superb quality and one family ownership from new. Two exceptional cars that have spent a lifetime together and will continue on as a pair in their amazing new home for many years to come. 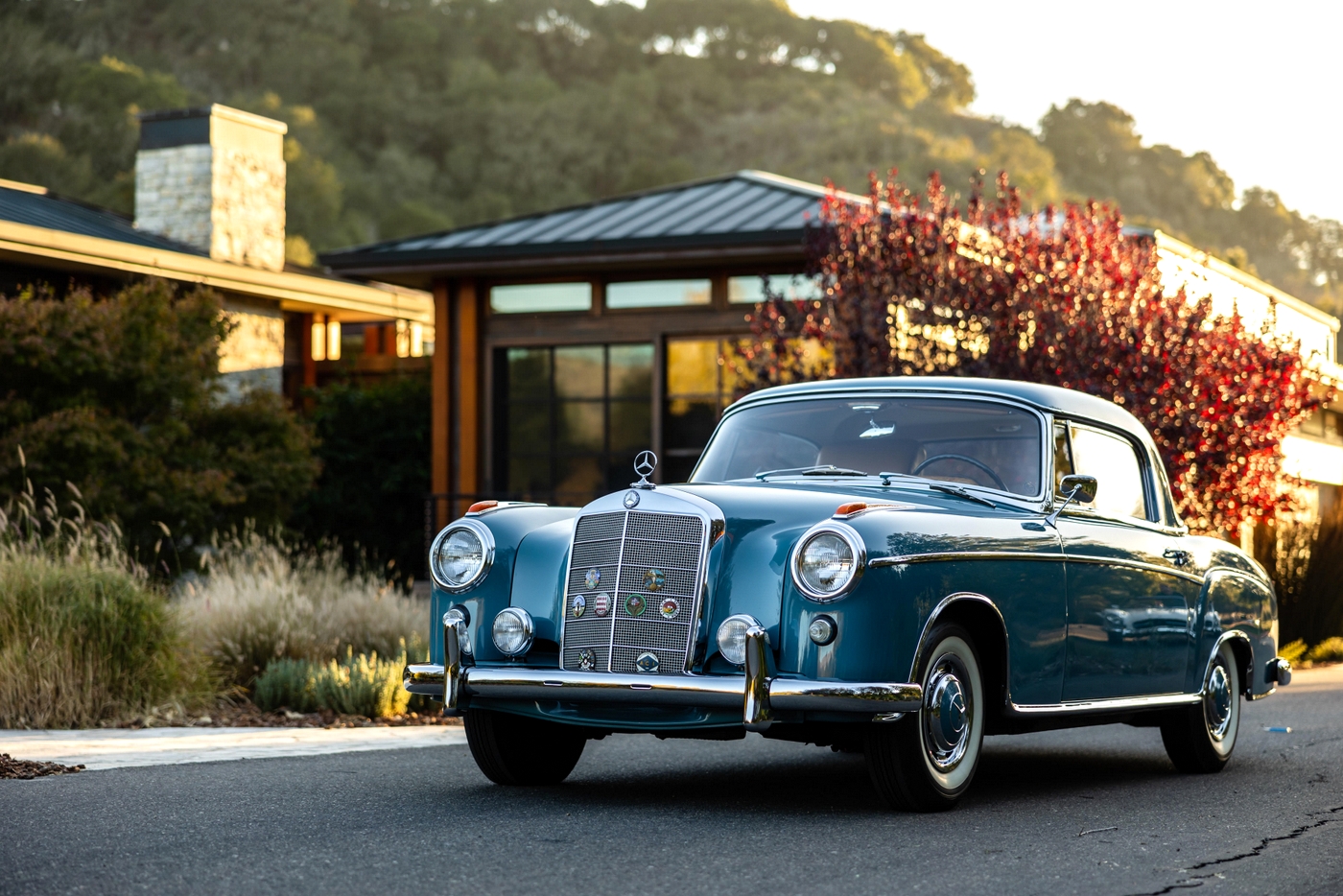 The coupe version of the Mercedes 220, the W180, was quite limited in production, launched in late 1956 as a ’57 model and lasting just three years. A total of 3,429 220 S coupes and cabriolets were built through the end of 1959, against more than 55,000 four-door sedans, making either of the two-door variants rare and desirable today. 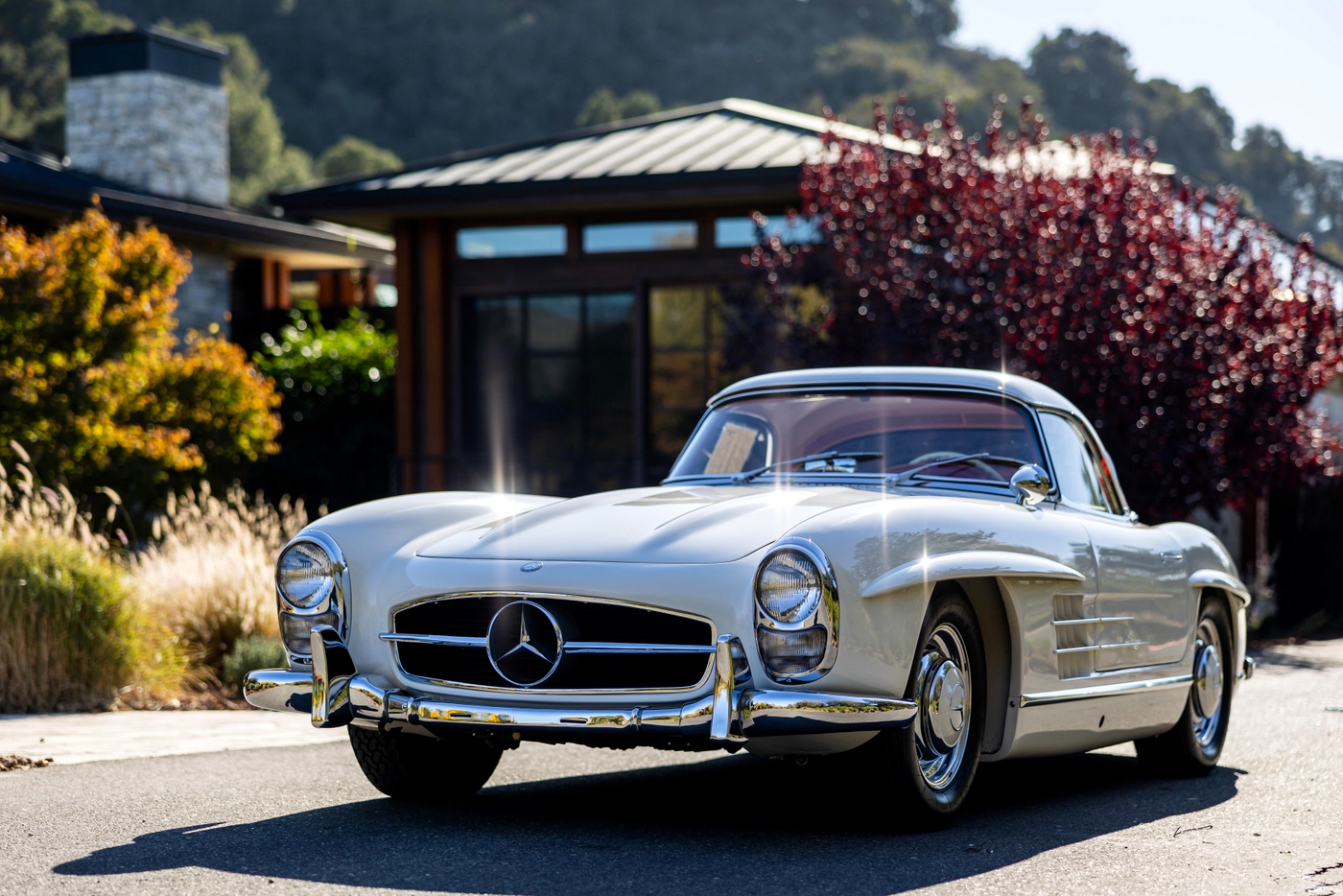 The 300SL roadster replaced the “Gullwing” coupe in 1957, with a total of 1,858 300 SL roadsters built through 1963, but not all of these were the same: The ultimate and final spec of the W198 chassis, including only the last 209 examples built, received the now coveted aluminum-alloy block engine along with four-wheel-disc brakes. 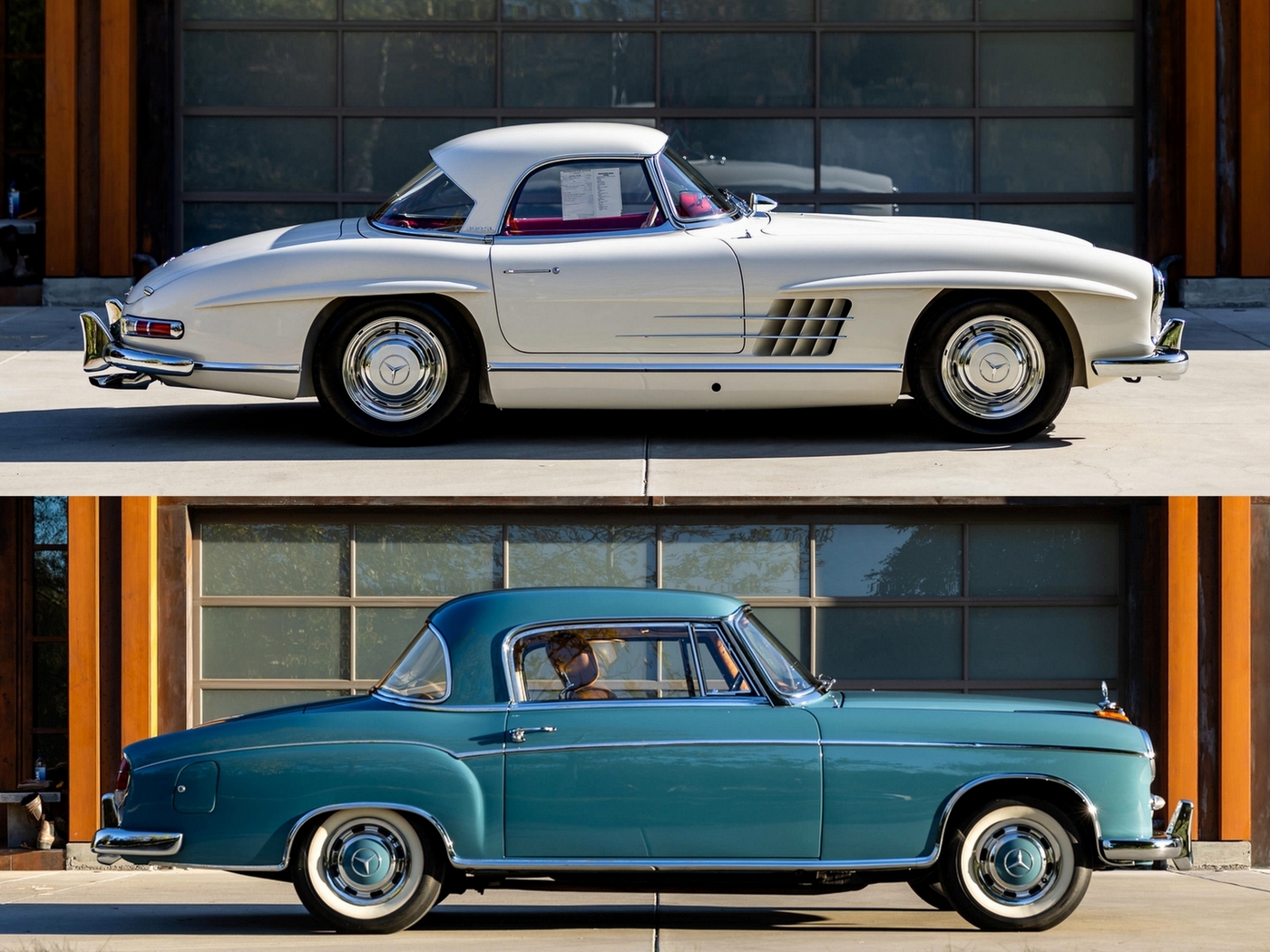 Mrs. Bertha “Tiny” (Linsenmeyer) Lutfy of Phoenix, Arizona, the original owner of the stunning 1959 Mercedes-Benz 220 S Coupe featured here, was a world-class champion trap-and-skeet shooter. She competed in the days when pigeons were not made of clay, and she traveled extensively throughout the United States, Mexico and Europe on the marksmanship-competition circuit. 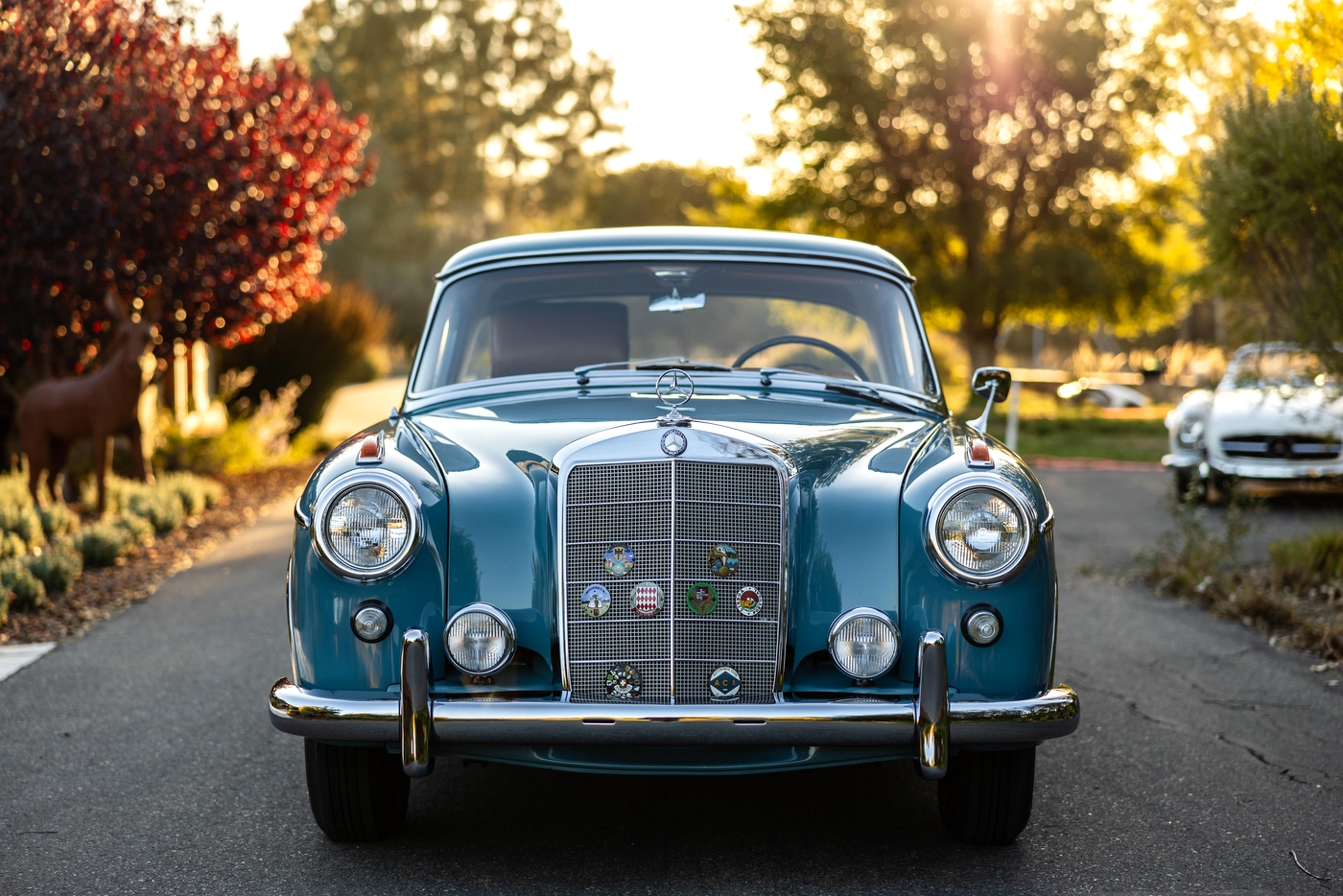 On one of her many trips to and through Europe, Tiny bought a used 1957 Mercedes 219 sedan from a friend on the continent as a means of travel from one shooting event to the next. When she made her way back home to Phoenix, Mercedes in tow, the car was sold. The quality of the 219 Sedan had made enough of an impression that when it came time to order a new model, Tiny had made up her mind: she was going to buy a new Mercedes.

The quality of the car had made enough of an impression that when it came time to order a new model, Tiny had made up her mind: she was going to buy a new Mercedes. DREW GRUNDFOR 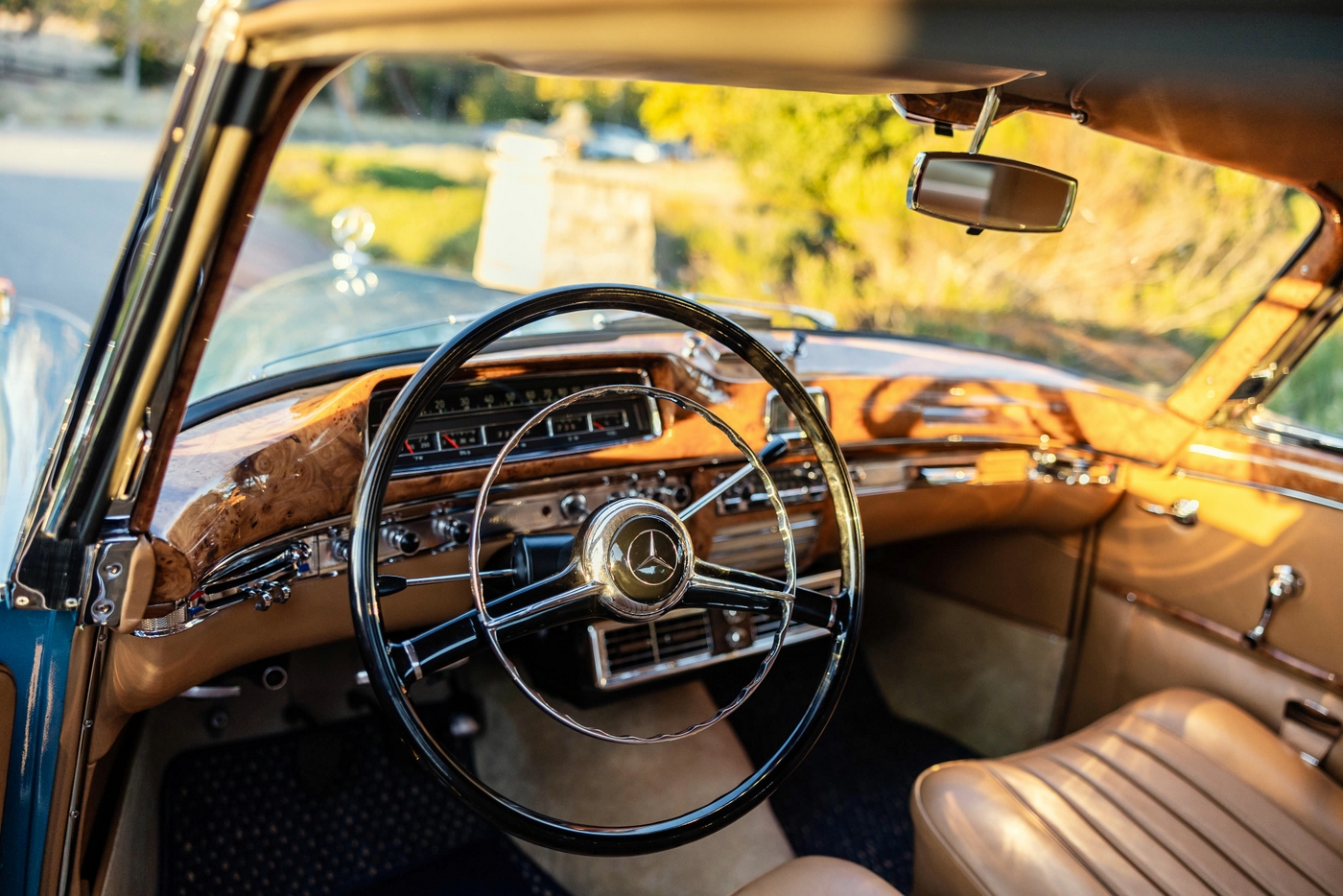 “In those days,” recalls Philip Lutfy, Tiny’s eldest son and longtime keeper of the pair of vintage Mercedes-Benz’s featured here, “the car companies promoted European delivery–you’d save some money instead of buying the the car new through a local dealer. A European-delivery 220 S like Mom’s was something like $5,800 with overseas delivery in 1959, while it was $7,000 through the local dealer. They’d help arrange for your flight over and everything. What’s more, when she brought it back to the States, it returned as a used car, so the import duty was less than it was buying a new one.” 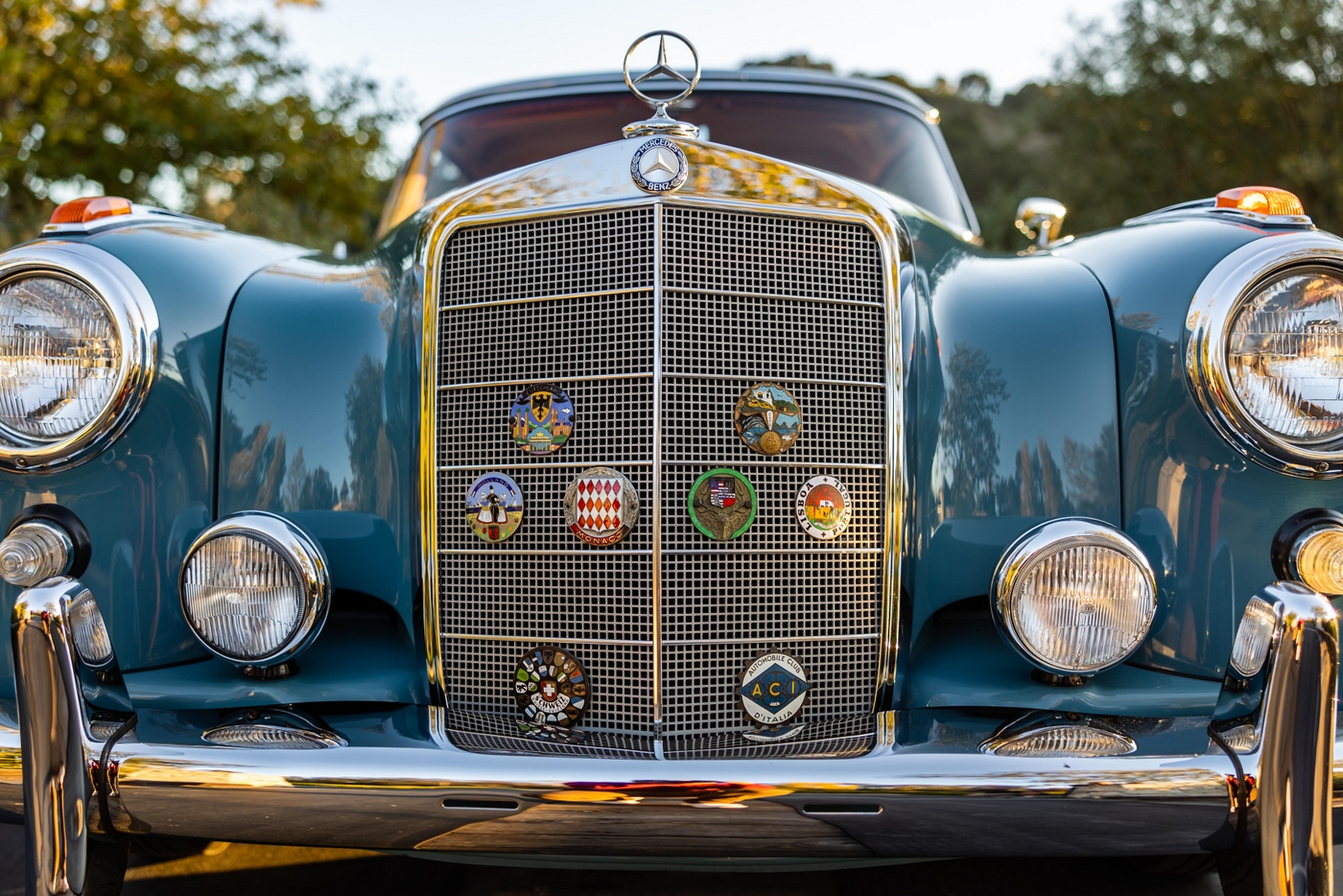 It’s difficult to deny that Tiny had taste. Her ideal choice was the fuel injected 220 SE Convertible, but, alas, this idea was shot down by Dr. Louis P. Lutfy, Tiny’s then-husband and Philip’s father. “She really wanted a convertible, but Dad said, ‘No, you don’t want a ragtop,’” Philip recalled. “Then she looked into the Webasto sunroof option, which is incredibly rare today, and Dad said no to that too, because he thought the sunroof would leak. So Mom went to the dealer to order her car; she was intrigued by the fuel injection, and inquired about it. And the salesman advised against it: He said no, fuel injection is brand-new this year; they still have to work the bugs out.” 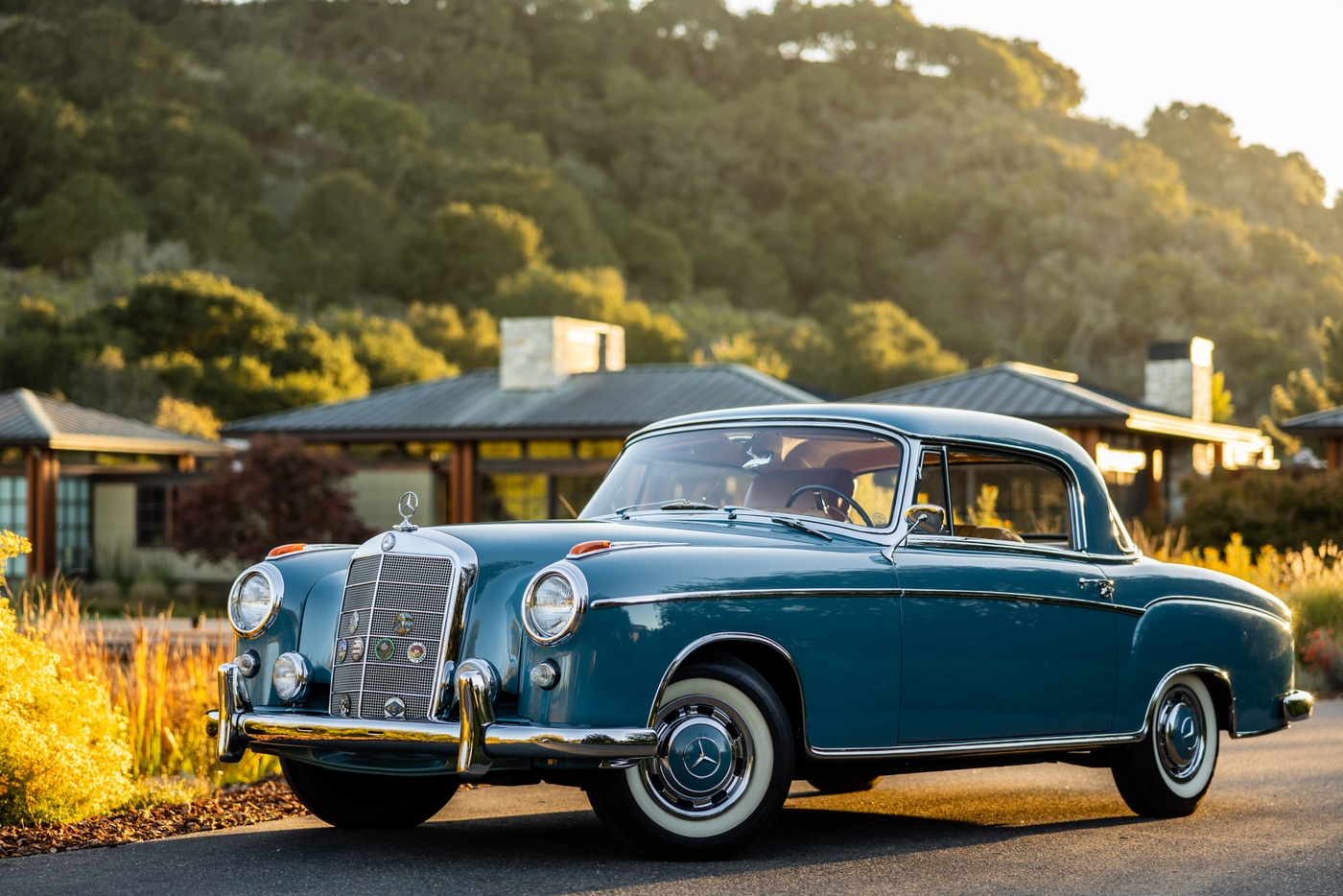 The result of Tiny being stymied was purchase of the car highlighted in this article, a 1959 Mercedes 220 S Coupe painted 334G “Hellblau” Light Blue, with the optional Becker Mexico radio and white wall tires. All was set, the Mercedes was waiting, and off Tiny went, back to Europe for competitive shooting and to pick up her brand-new American-spec Mercedes coupe. 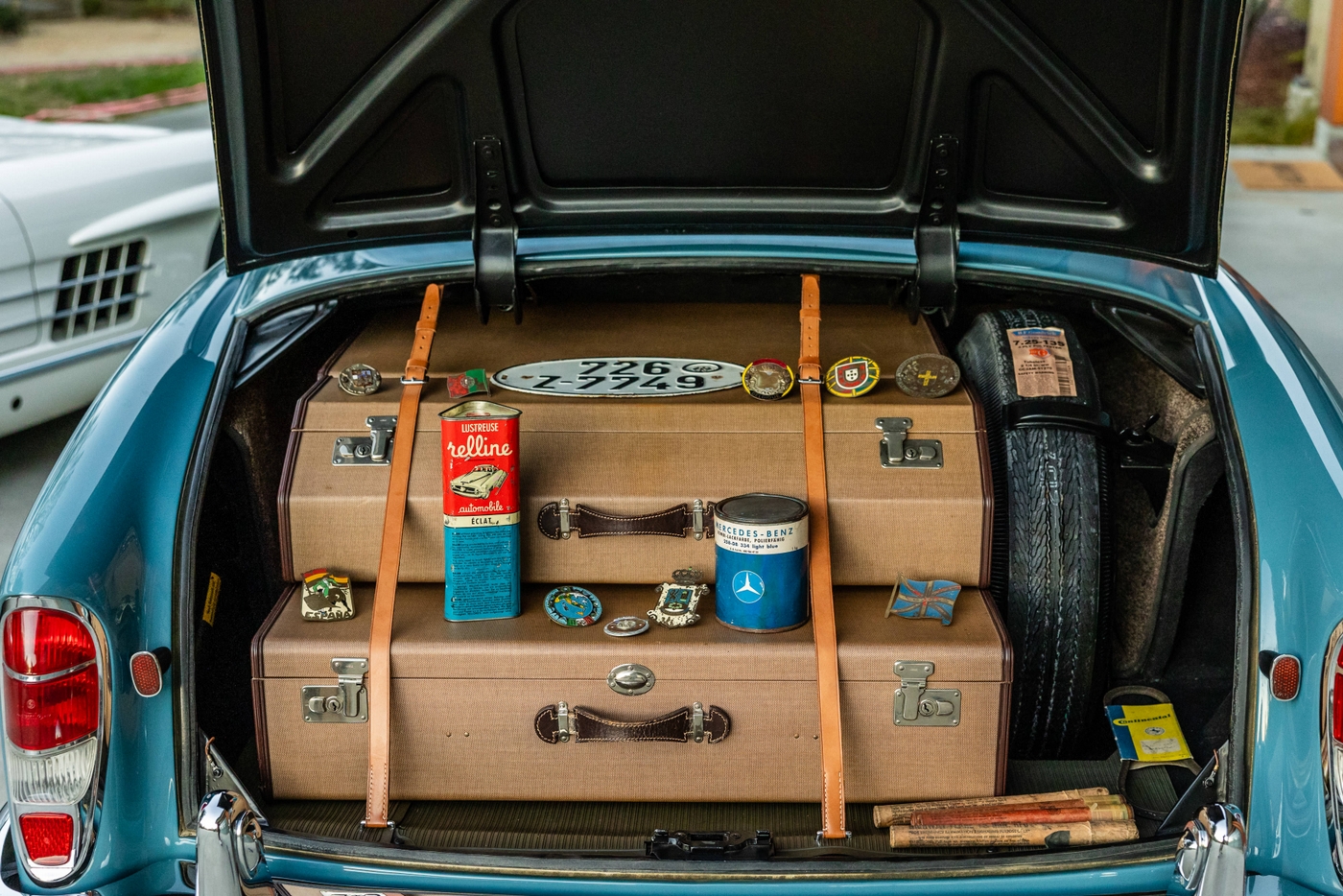 Philip recalled that, “At one point, she sent the car back to Phoenix to have air conditioning put in, then had it shipped back to Europe. When we were on vacation in Europe, I drove it mostly to sharpen up my driving skills. I was very lucky. We’d be over there–my brother, my sister, my mother and I–and we’d drive to some little town early in the morning to get fresh bread, then we’d get to another town to get some wine, and by noon we’d stop on the highway and have a picnic. There were roadside tables for this along the way–all you’d have to do was get out a tablecloth and spread out. We always had packaged food in the car, with different specialties from different countries.” Good times, and by the early ’60s, the 220 S was back in Phoenix to stay. 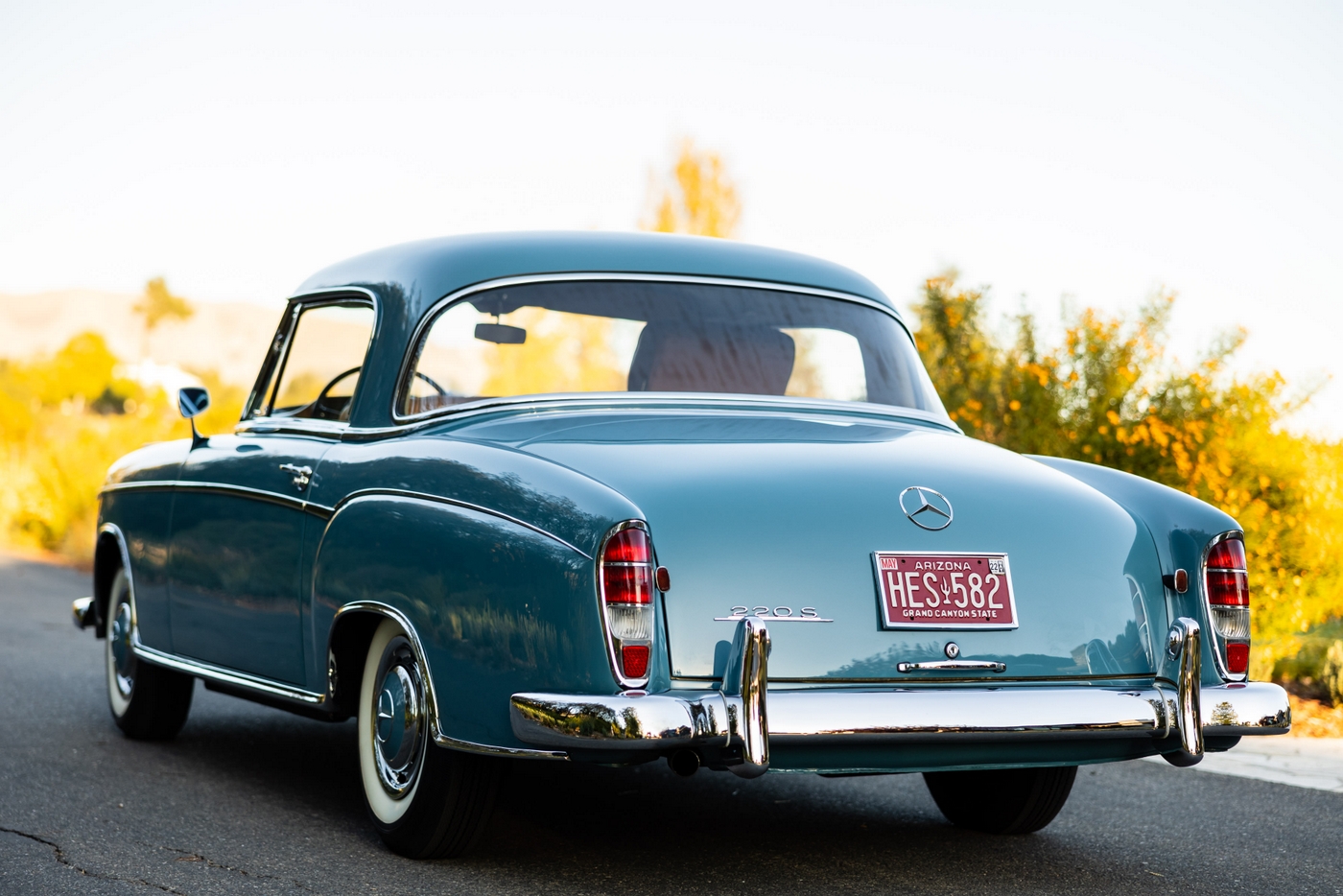 Tiny was 96 years old when she past away in 2013, and even though she’d gone through a number of other European coupes in her long life, from Jaguar to Rolls-Royce, she always had a soft spot for her old 220 S. “She really liked cars, and took good care of them,” son Philip remembers. “She loved that 220 S, because it brought back so many fond memories–of her traveling in Europe from one shoot to the other, her shotgun in the back; for outings and picnics; and occasionally for extended vacation trips when we were over there. I know she really appreciated me taking it all apart and making it better than what it was.” 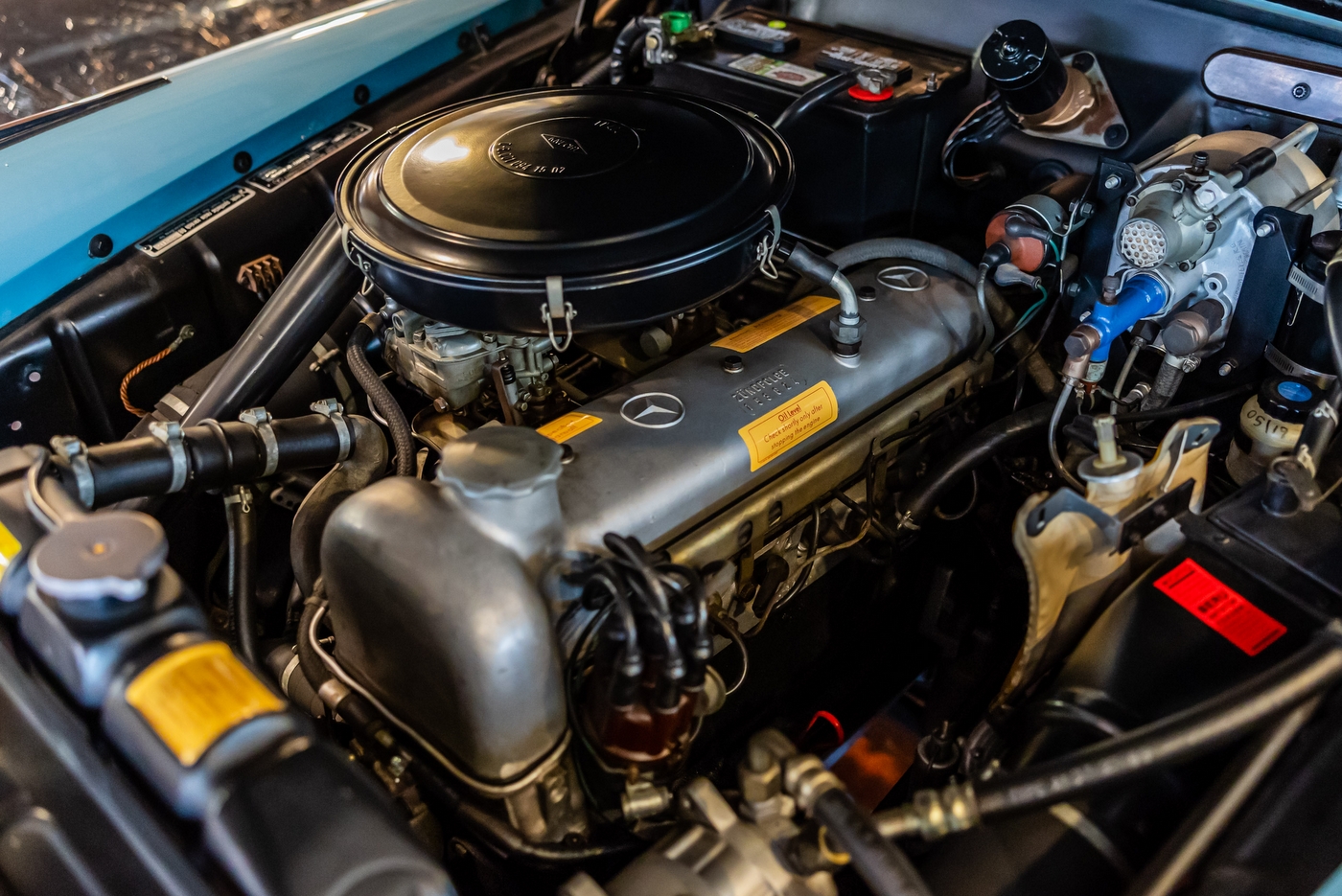 It’s an understatement to say that the Lutfy’s were pleased enough with Tiny’s 220 S purchase that they became a Mercedes family for a while thereafter…six decades and counting to be exact, and still Mercedes-Benz fanatical to the core. Philip noted ”We got a four-door 190 sedan in 1960, for my sister, Nan, and me to take to Phoenix College. We drove it for years.” 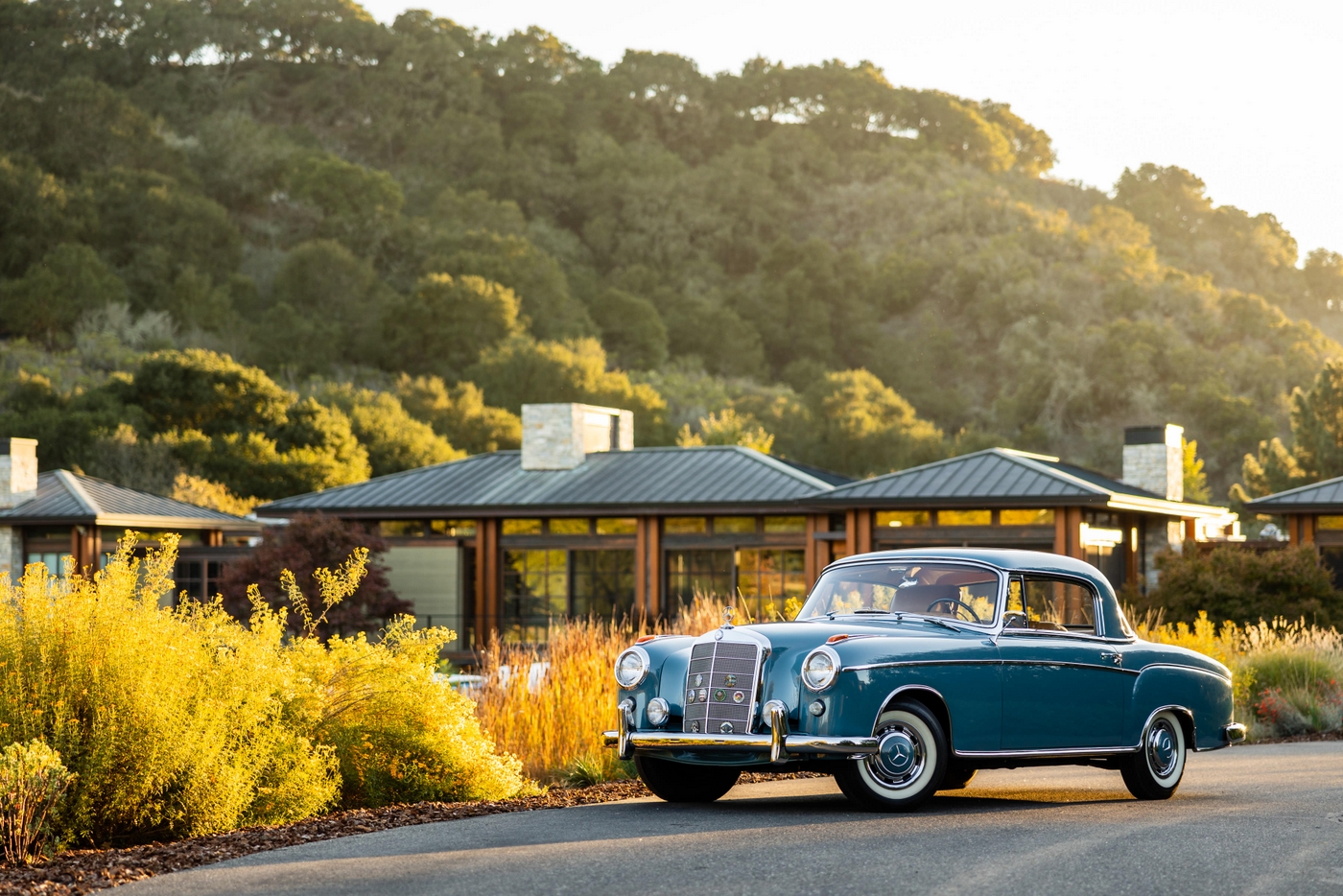 All this led fairly directly to Philip’s father’s eventual purchase of one of the last Mercedes 300 SLs ever built. Philip remembered, ”Dad saw that we got good service out of the 190 in college, got a burr in his saddle, and decided that he wanted a new 300 SL. He was kind of a flashy guy, he was divorced, and he wanted something sporty to be seen in.” This was in 1963, when Mercedes-Benz was trying to get rid of the last of the old 300 SLs in favor of the “new-and-improved” 230 SL, just recently launched in Geneva. A total of 1,858 300 SL roadsters were built between 1957 and 1963, though not all of these were the same: The last 209, of which one found its way into the Lutfy family, received a light-alloy block in the engine and four-wheel-disc brakes. 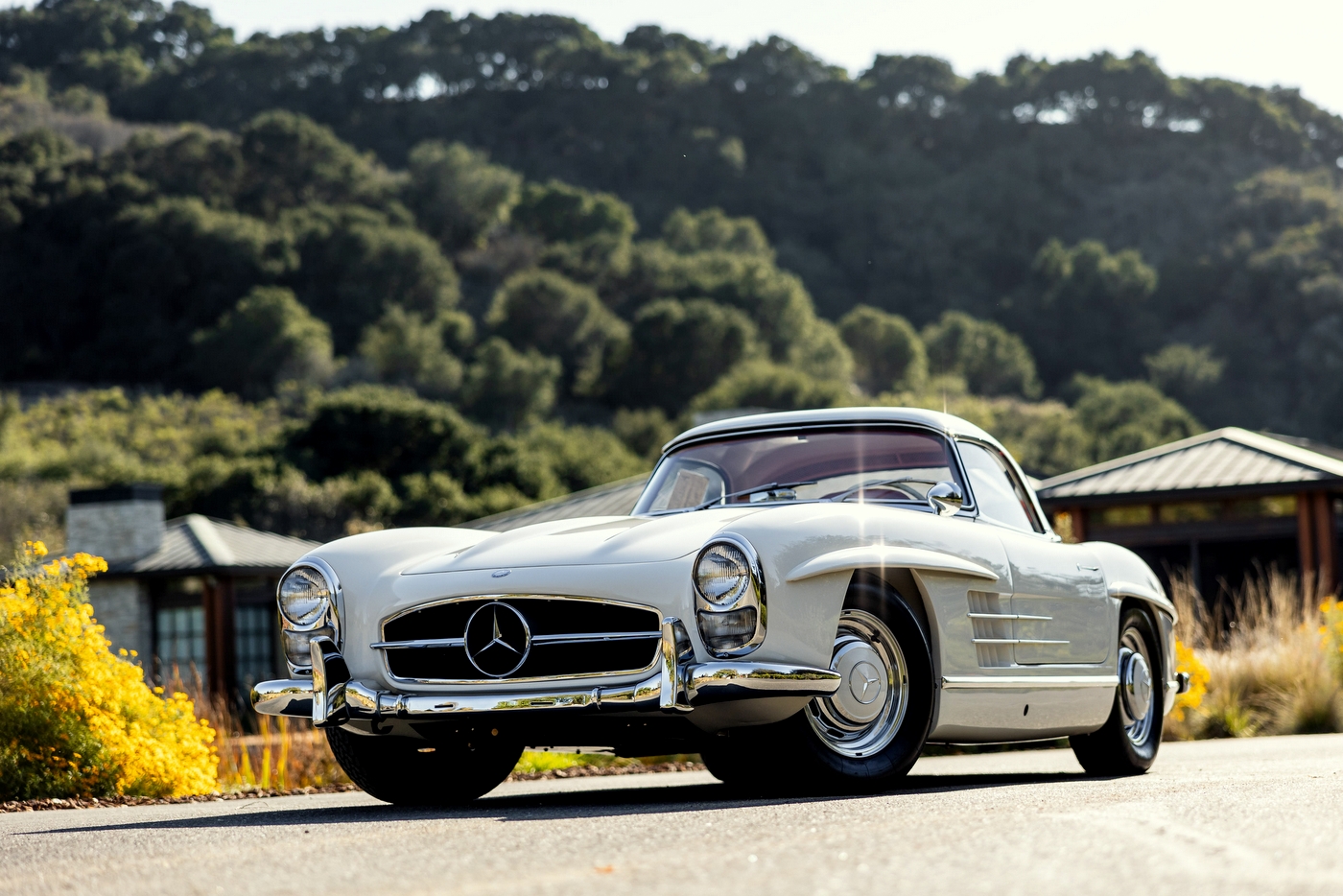 As hard a time as Louis gave Tiny about her choices on the 220 S a few years earlier, the karmic wheel of destiny turned on the now-single Louis’s decision-making process. “He wanted European delivery like Mom got,” Philip recalled, “so he went to Phoenix Motor Cars, the local Mercedes-Benz dealer in town, and they said no to European delivery on the 300 SL, they were promoting the new car, the 230 SL. He would be getting one in the United States, or not at all. 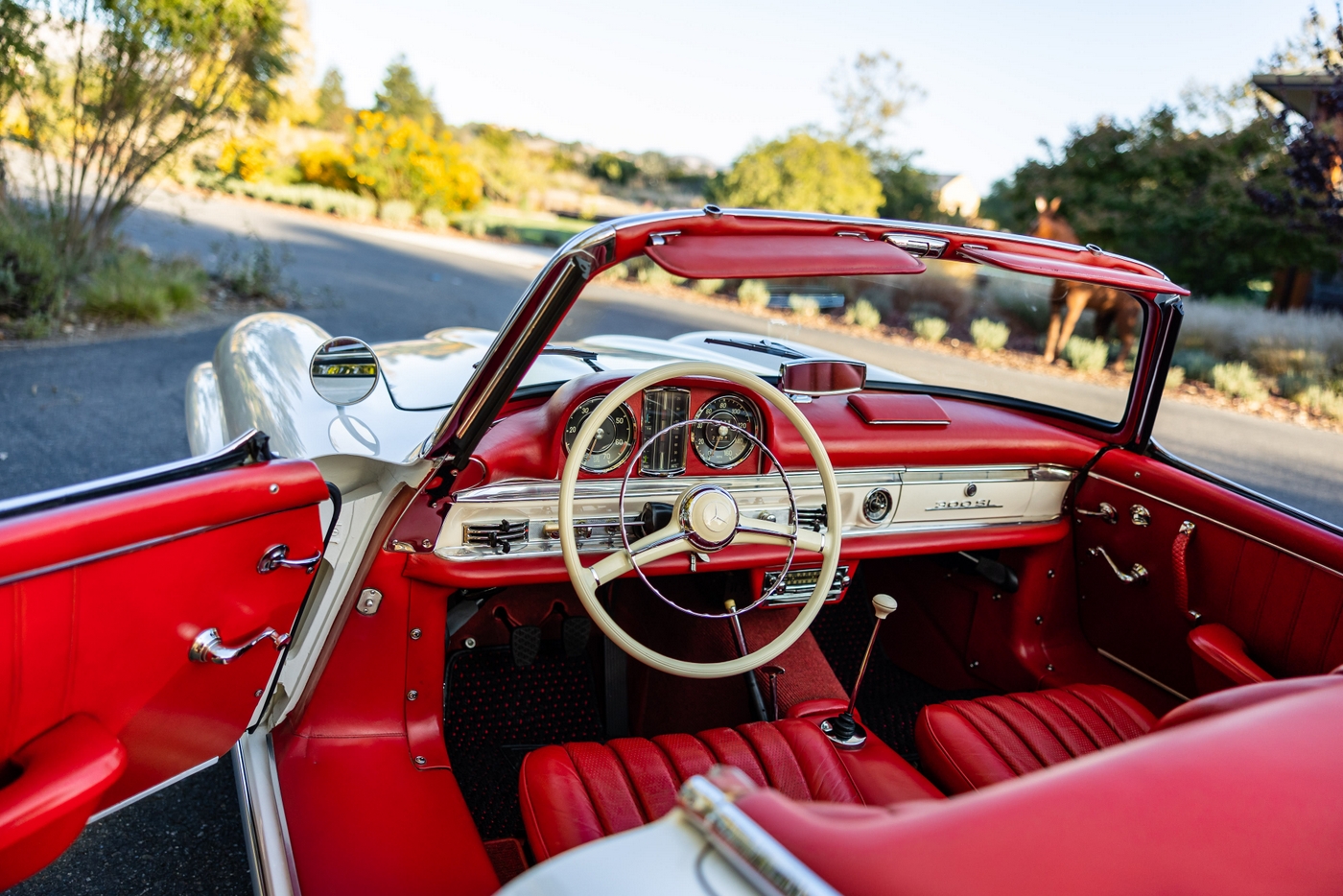 Philip remembered, “Despite several unsuccessful attempts at getting one, Dad still wanted a 300 SL. It happened that dealers who still had them at the time were discounting them to move them out of inventory because of the new 230SL model on the horizon; the sticker for the car my Dad ended up buying was $12,308.82, and they discounted the price to an even $10,000”. It’s worth a retrospective chuckle to note that Mercedes-Benz’s U.S. operations had to resort to drastic discounts to get these all-time classics out of inventory. Funny how things change. 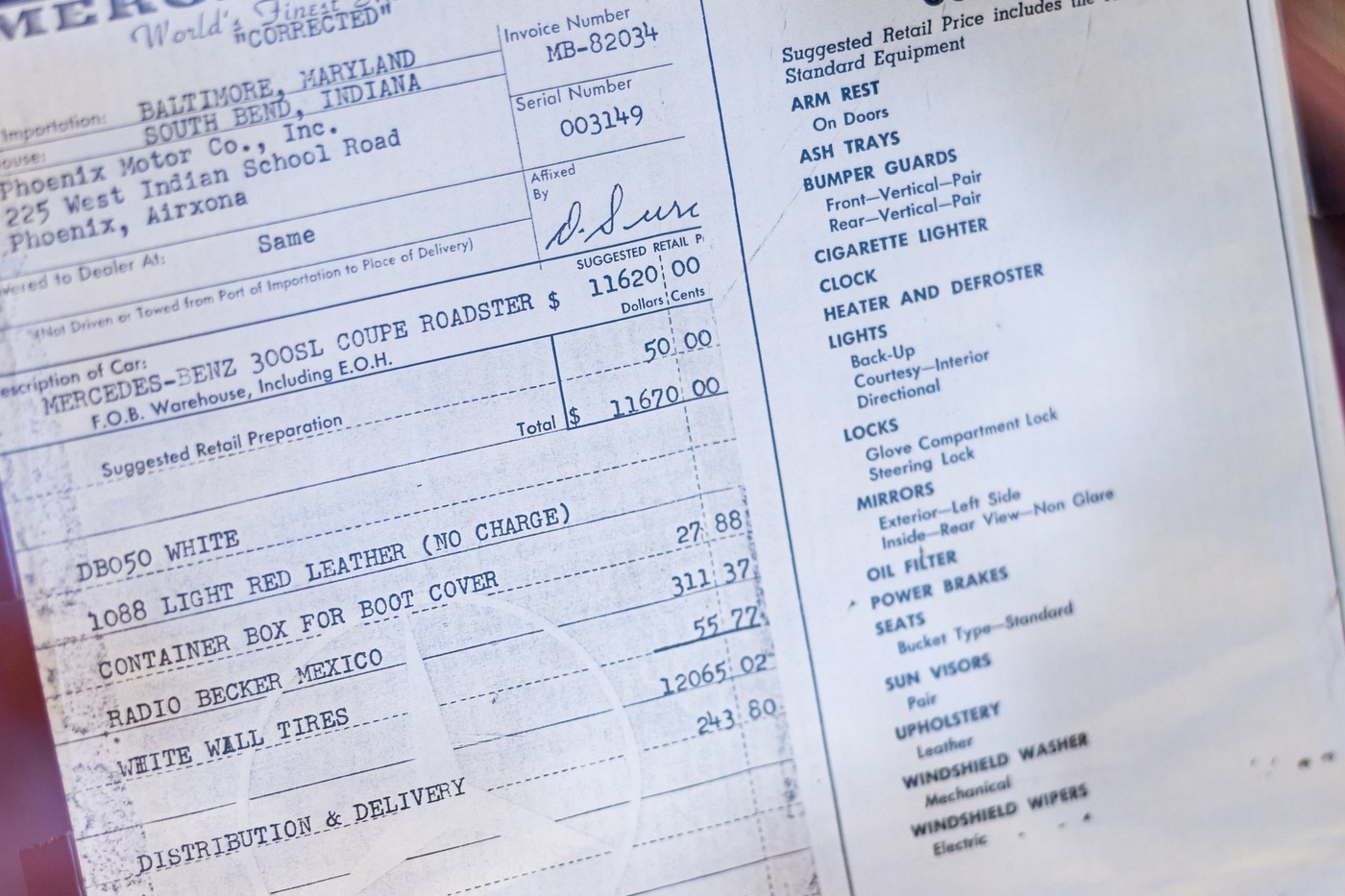 As it turned out, Philip’s father’s process in getting the roadster he ended up with was fortuitous, a car that is now widely considered the most desirable spec combination for 300SL roadsters, notably because of the alloy block engine and four-wheel-disc-brakes…and he got it at a discount no less. It was just a fluke that Dad would get one of these, but he did indeed get one 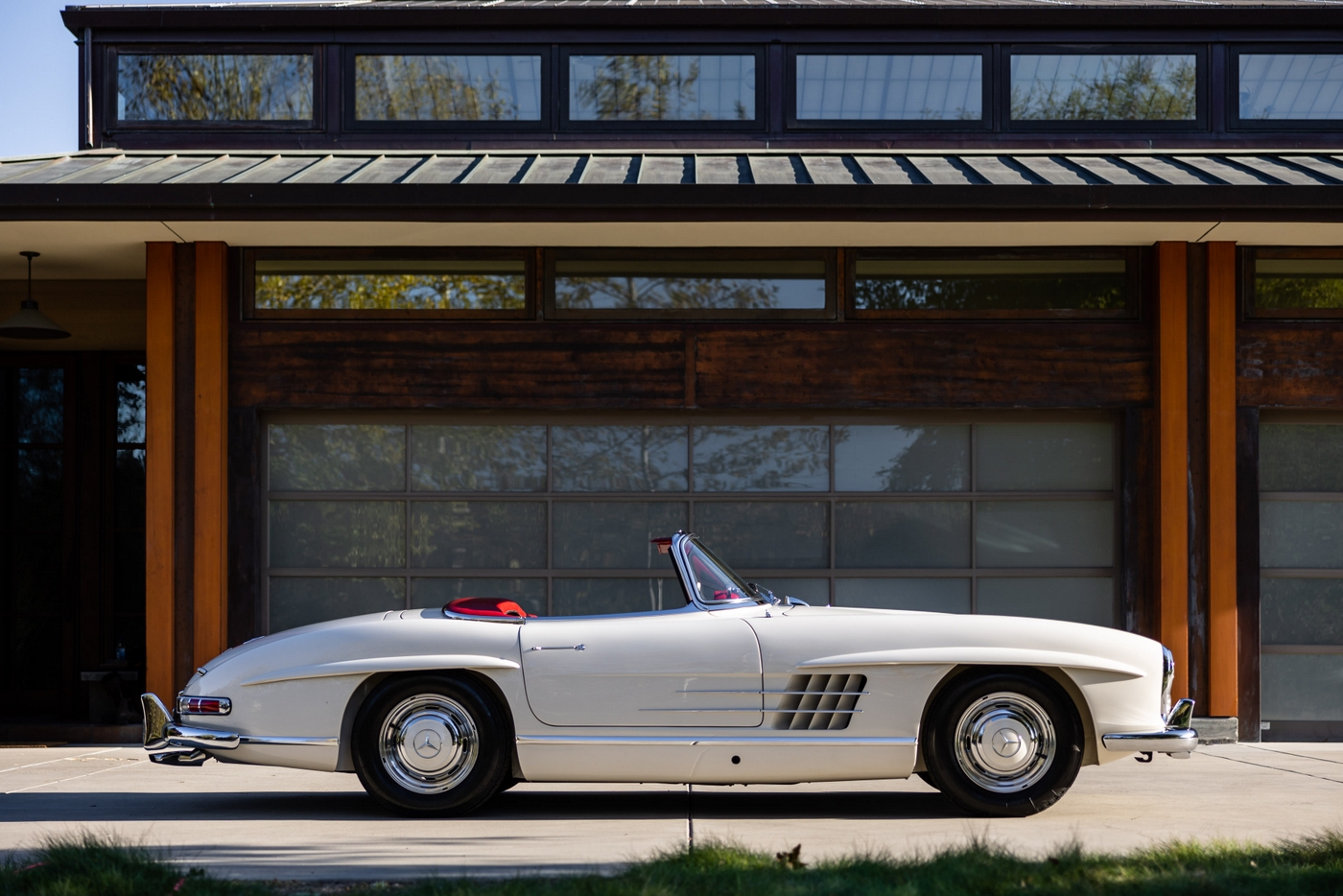 It was also something of a fluke that Philip ended up with the 300 SL. Eventually, Philip’s dad got tired of the SL for this reason or that, he bought some other cars, one a Dual-Ghia he had for about a year. Philip says, “He wanted to get rid of the SL in the ’70s, but no one was interested in it, if you can believe that…well, no one beyond me, a relatively young man at the time in my 30’s”. 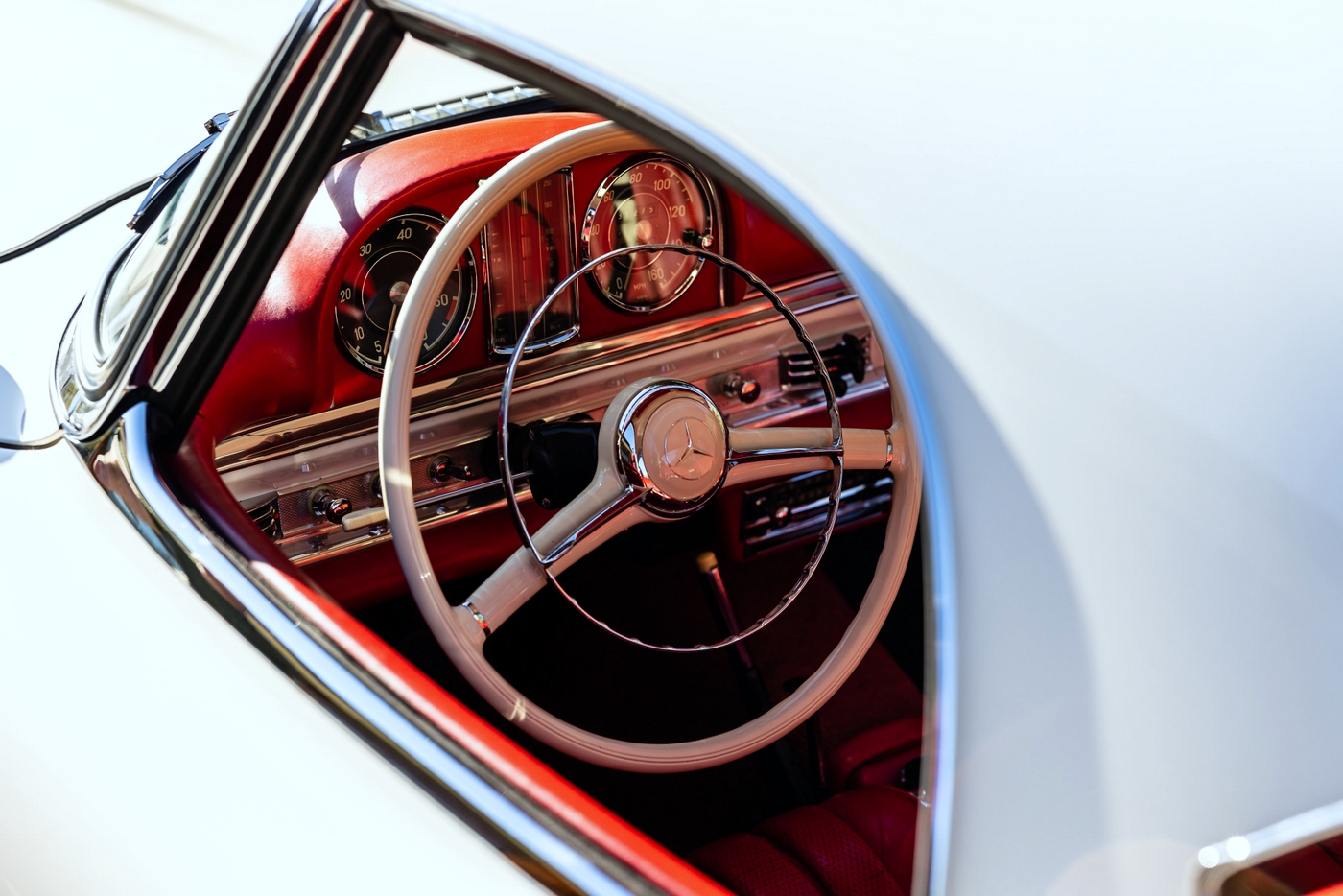 Philip continues, “Eventually, Tom Barrett, of Barrett-Jackson, offered my dad $3,000 for the car. I was off in Europe at med school at the time, and my mother told my dad that it would really upset me if he sold it. My parents had split up, but they still talked, and she put her foot down. The car was brought to our house where Mom lived, parked under the carport behind another car, and Mom took away the keys for good measure. When my father passed away, I became the rightful owner and I’ve had it ever since. 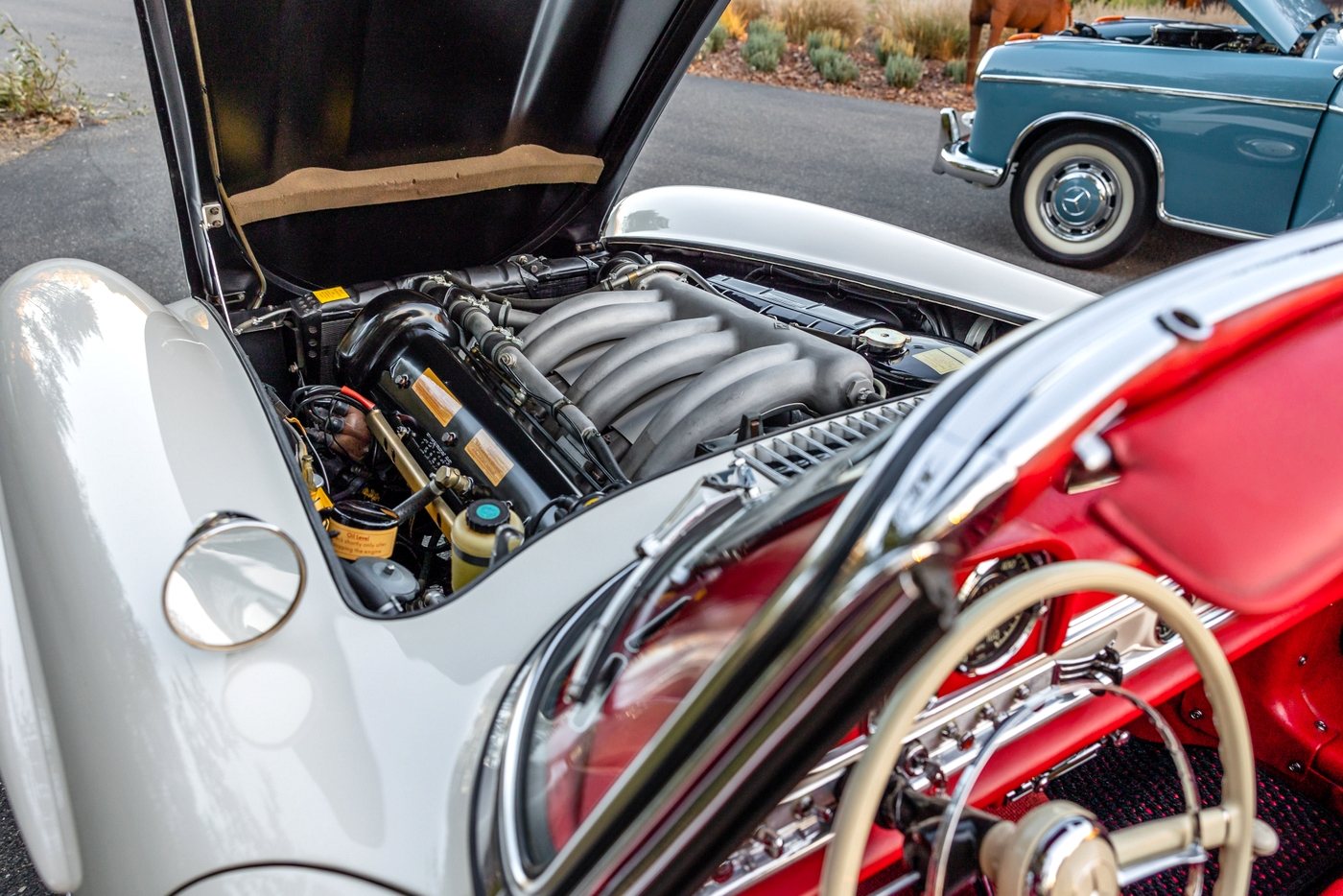 Each car had been in the family for more than a quarter-century at this point when Philip came into ownership of the car, so moving them on to new homes seemed foolhardy somehow. And each of them remained straight and unblemished. “There was never any rust damage or accidents,” Philip tells us. “Dad was very particular about his car”. 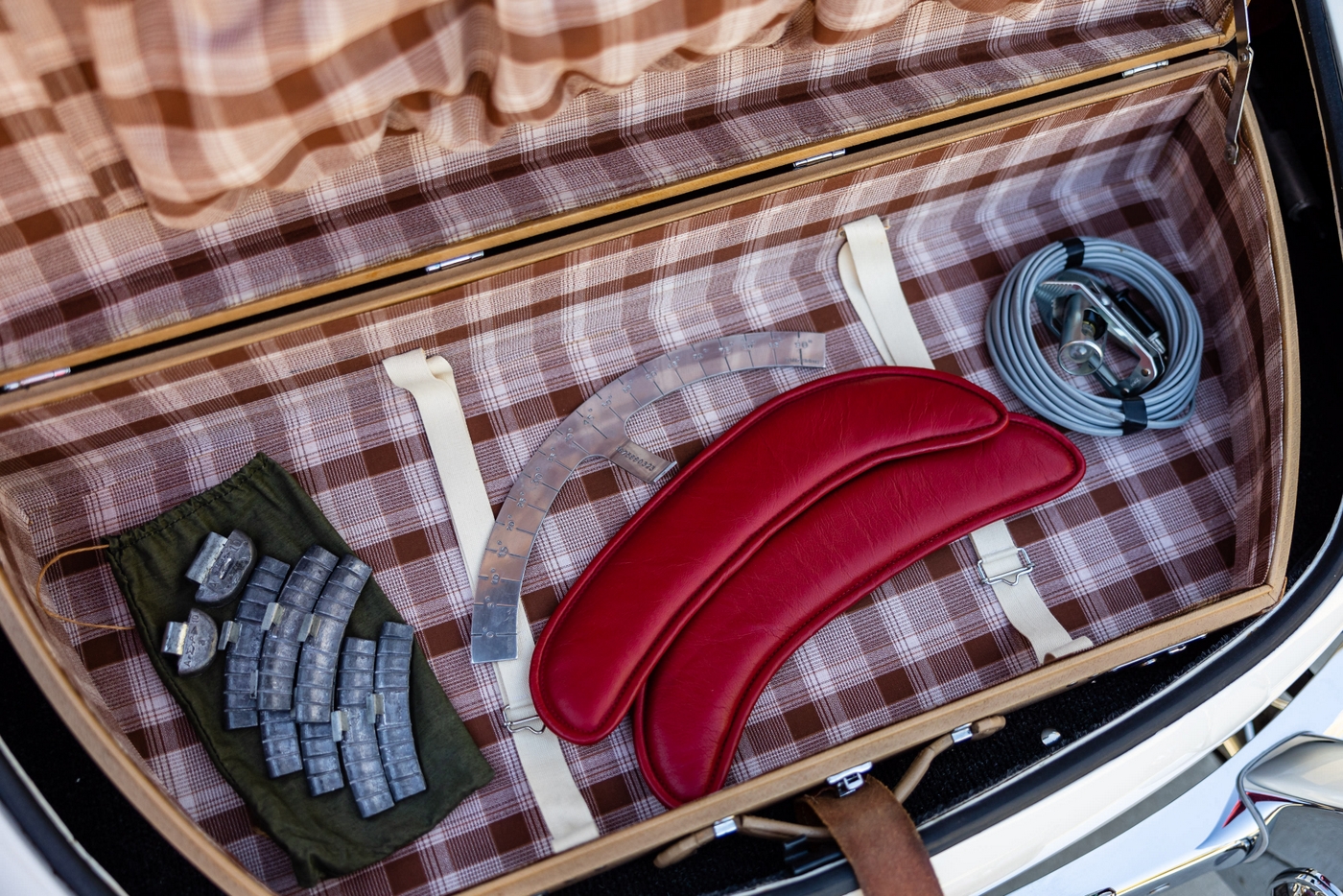 In the late 1980’s, Philip Lutfy made the decision to perform restoration work on both his father’s 300 SL and his mother’s 220 S Coupe. “I got the cars for free and spent way more money restoring them than what they were worth at the time, but I thought, so what, it’s Mom and Dad’s cars.” It’s fair to say that these two cars are the cause for Philip’s particular brand of three-pointed-star enthusiasm, which has encompassed over 100 Mercedes classics over six decades of collecting and continues to this day at age 80 years young.  Both the 220 S and the 300 SL will continue on in life together in a beautiful new home in a wonderful California collection, with the hope to keep the cars together for many more years to come, to add more chapters to this unique story of two exceptional Mercedes-Benz that have spent their entire lives together. 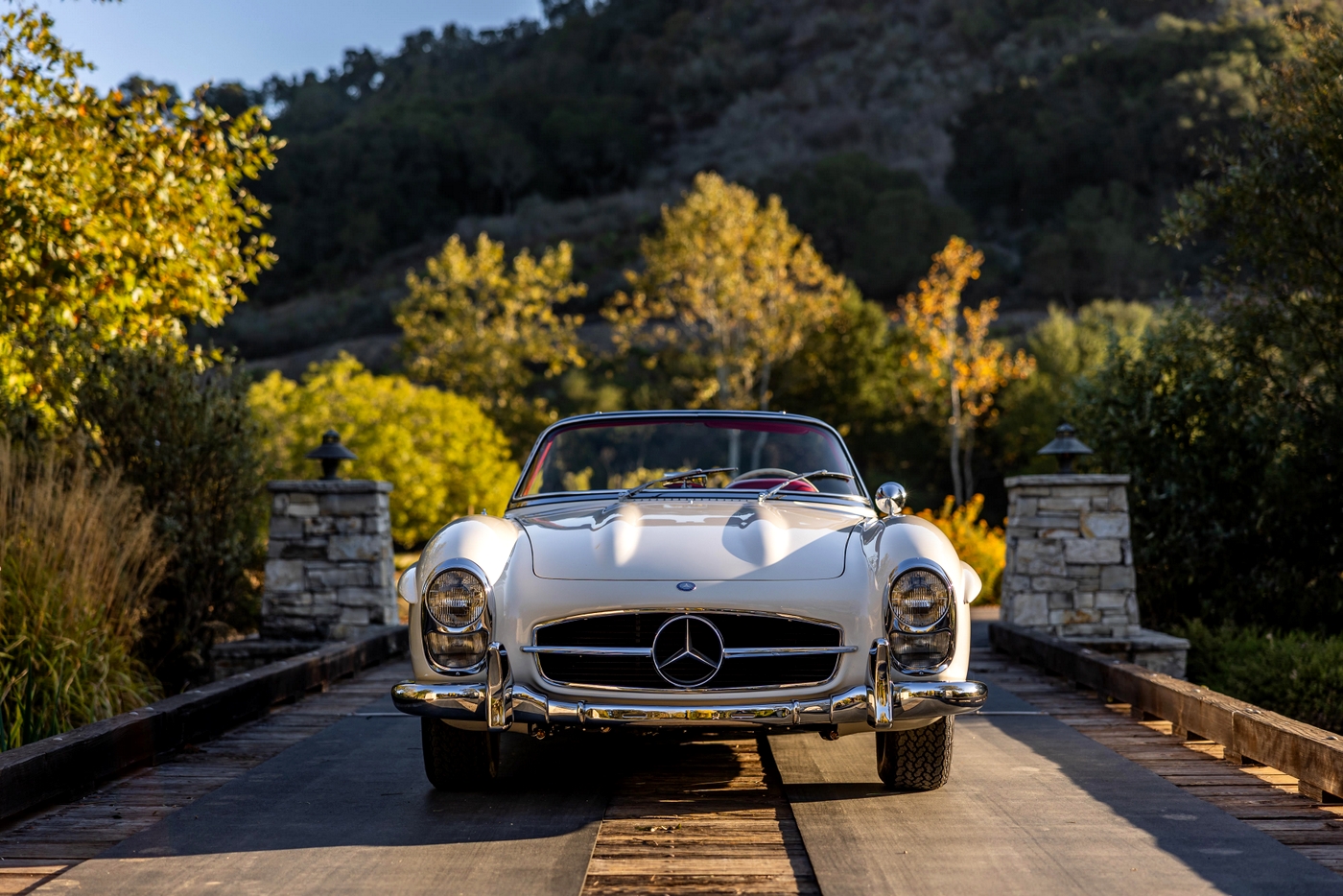 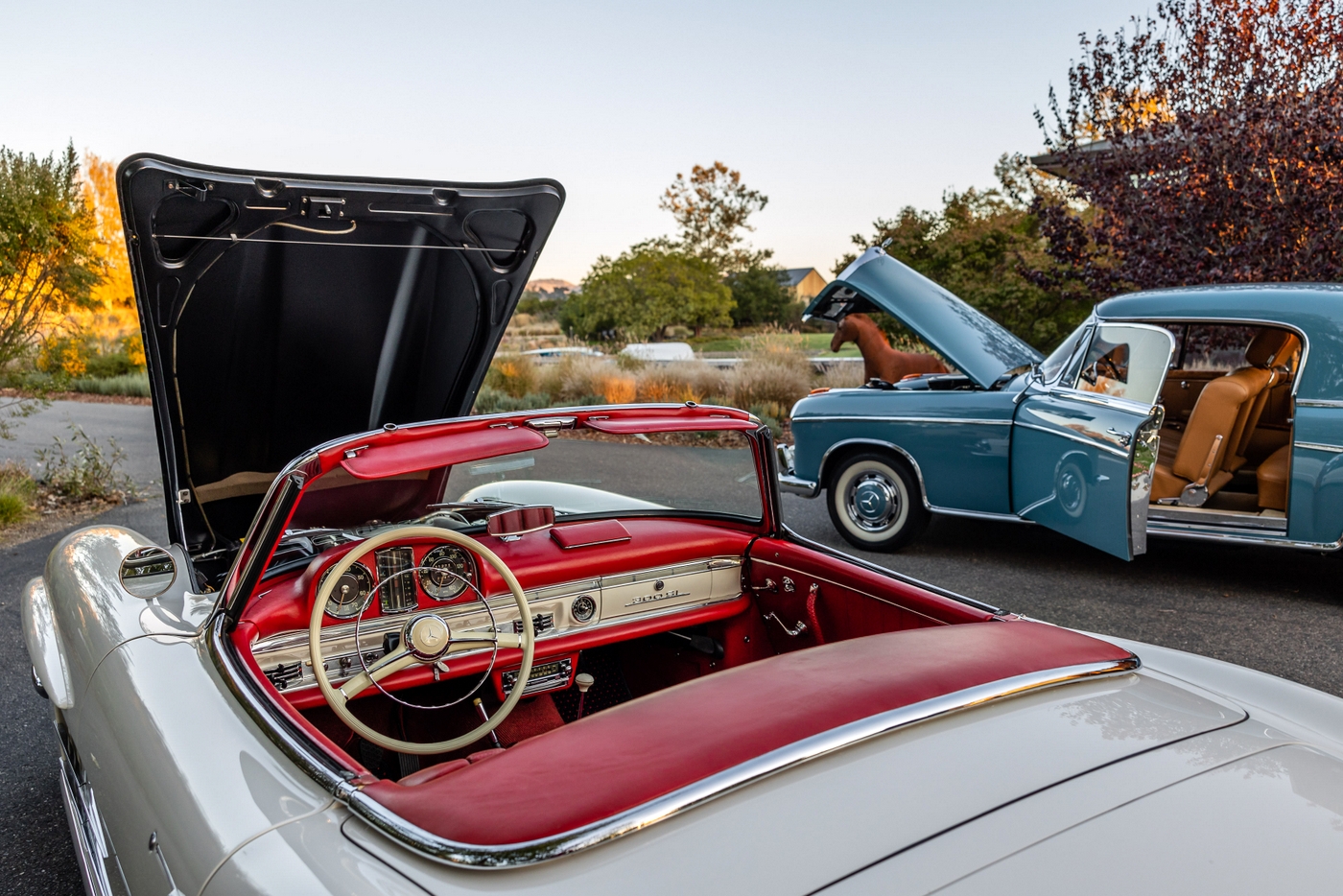